Soda has been a beloved drink since 1767. Since then it has taken off into a variety of flavors and brands. While most sodas are ok to drink on a gluten-free diet, it is always best to double-check the label and ingredients.

With coca-cola being the largest beverage producer globally, I was curious to know, is Coca-Cola gluten-free?

Yes, The company states that none of the Coca-cola beverages contain gluten and are suitable for celiacs to consume. However, they do not have a gluten-free label or certification on the bottle. They do state that gluten-containing ingredients must be identified on the label.

The below picture was taken from the company website for reference.

Coca-Cola has had a long lifespan, with the first glass being sold in 1886 at a pharmacy in downtown Atlanta, Georgia. While the drink has gained massive popularity since its creation the ingredients have not been able to stay the same throughout time.

The original drink was made with coca leaves, the same plant cocaine comes from. At this time, cocaine was legal and a common ingredient in medicine. As a doctor invented the drink, it was first seen as a medicine and advertised to cure headaches, upset stomach, and fatigue.

This ingredient was also an inspiration to the name, hence the Coca in Coca-Cola. In 1929 the coca was removed from the beverage, and the ingredients slowly molded into what they are today.

The picture below was taken from the website for reference. 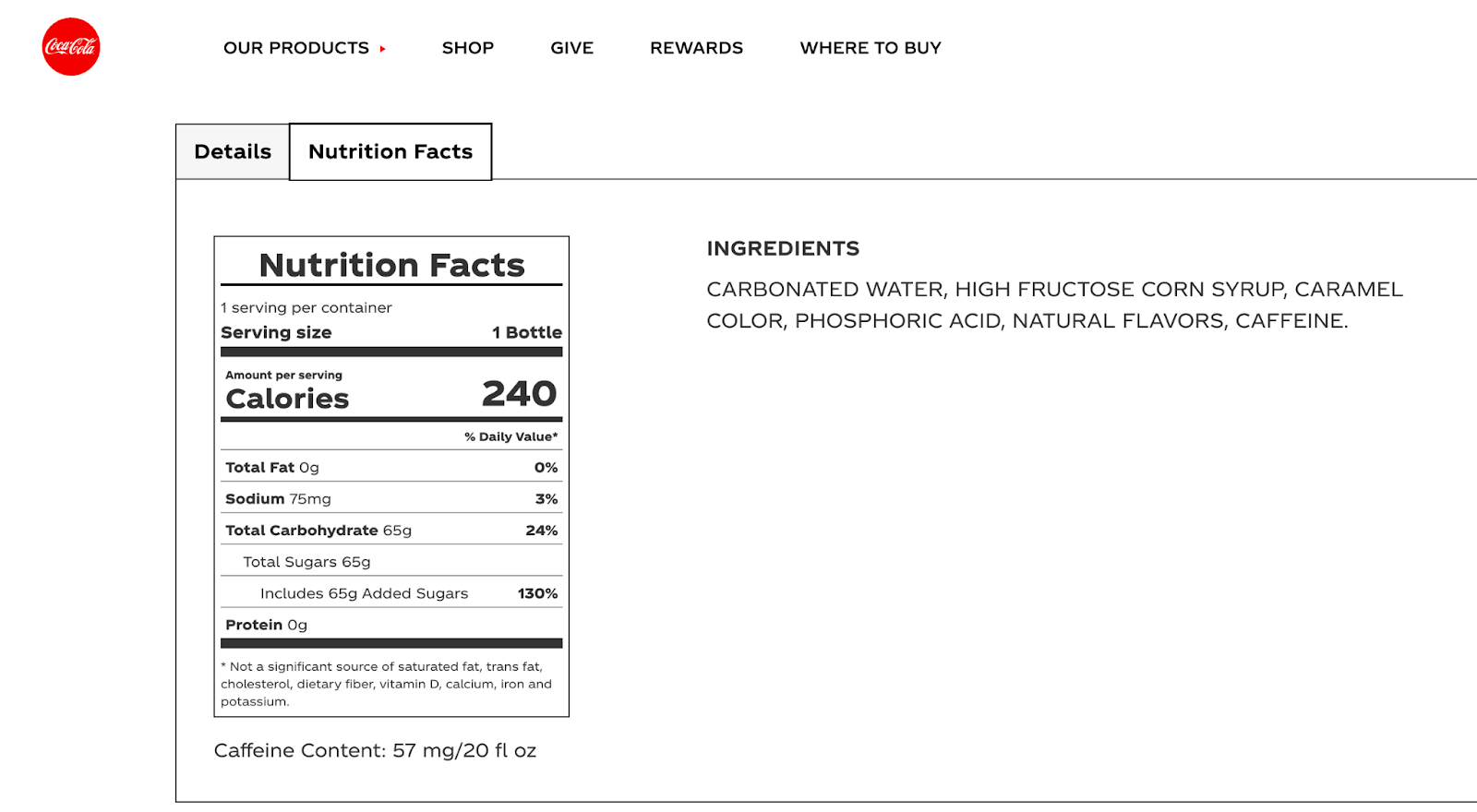 I’m going to go a step beyond just listing the ingredients. I have further explained what they are and how they are gluten-free.

This is the most self-explanatory ingredient on the list. This is water that has been infused with carbon dioxide gas which gives the soda its bubbles. I try to avoid drinking soda (or pop) and replace it with soda water; this quenches my craving for fizz without all of the excess sugar and chemicals.

High Fructose Corn Syrup is a sweetener made from cornstarch. It can also appear under the names glucose-fructose, isoglucose, and glucose-fructose syrup. Cornstarch is a fine white powder produced from parts of corn grain and is naturally gluten-free.

Carmel color is a widely used food coloring in beverages and gives Coca-Cola its deep brown hue. Carmel color is created by heating carbohydrates such as inverted sugar, molasses, malt syrup, and more.

It is generally gluten-free in North America, and if it contains wheat, it must be stated on the food label per the Food Allergen Labeling and Protection Act.

Phosphoric acid can also appear as orthophosphoric acid; remember this when you put your label-reading skills to use in the future. This ingredient is an odorless liquid that gives the beverage an acidic and tangy flavor.

This will be a frequent ingredient you see in many food and beverage products. Natural flavors are used in products to enhance the flavor of the beverage or food. According to the FDA, these are derived from the below fruits, vegetables, plants, and animal products.

I’m sure you’ve all heard of caffeine before. That crutch we often lean on to get us through our hectic days. Caffeine used to be a naturally occurring ingredient in many cola soft drinks as the producer used kola nut, which naturally contains caffeine.

However, they stopped using this ingredient in 1929. When this was omitted, they needed a replacement to give the drink the same flavor that the caffeine was supplying.

Today they are most likely using synthetic caffeine; however, the website does not state where they derive the caffeine from or how it is made. Either way, it is gluten-free. If it is naturally made it will be extracted from plants, and if it is not, it will come from urea and chloroacetic acid.

Check out this video to see how Coca-cola is made:

Now that you know exactly what goes into making this soft drink, you can decide for yourself whether or not you would like to enjoy it. If you opt in to drink a can, bottle, or cup of cola, there are a few ways you can do so.

The below drink variations are all gluten-free:

Check out my recent article to see a full breakdown of the Coca-Cola Zero ingredients.

The company has been known to have more flavors in the diet version; however, this is the current list on their website, and they may change seasonally. The ingredients are similar to the original but are slightly different. You can find the full nutritional information on their website.

The beverage can be found in a variety of options that are also gluten-free. These include the following:

Coca-Cola does not have a gluten-free label but states that none of its ingredients contain gluten and are suitable for celiac consumption. They have several additional flavors and variations that are gluten-free. If you are looking for an alternative or prefer to drink Pepsi, this is gluten-free too.

Need a meal to pair with your soda? Check out Arby’s gluten-free menu.